Only once in a lifetime, if that, do we get to hear such great and earth shattering oratory. 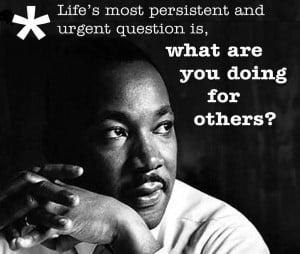 reported that Dr. Martin Luther King, Jr. stood in front of a quarter million civil rights workers on the Mall in Washington DC in 1963 when he gave that speech. Time has since shown that he was standing front of history.

While most leaders would have said “I have a plan”, he said “I have a dream”. He was not telling people what he wanted them to do but rather why they should each make his dream, theirs. To help each person understand that they had the power to change their own life as well as the course of history.

Dr. King was not addressing millionaires or politically powerful people. He was talking to an America that wanted to believe that what always had been didn’t have to be. To an America that used skin color, ethnic origin, religious belief and other “silos” as a way of keeping some of its citizens from enjoying the full bounty of freedoms the American dream had to offer.

He argued that the right to live a dignified life was a promise our country could and should offer to every citizen regardless of any station in life. He called for a country where not only the government treated everyone as an equal but also for a country where every shopkeeper, factory owner and neighbor would treat and accept everyone else as an equal. The call to action was for all of America – those with and those without power.

Most of us go through life thinking we are small boats on a fast moving river of time – that at best, we can keep from hitting rocks or sinking in a storm. I would argue, as I believe Dr. King did, that each of us has the opportunity not only keep afloat in rough seas but to actually steer a course towards calm waters. And more importantly, to help others reach safe harbor too even if we have not yet reached it ourselves.

For millions of Americans who still struggle in today’s economy, it is easy to forget that we can use the excess food in our backyards instead of just our back pockets to help our neighbors in need – not only to help give them a meal but to help give them a future. It is important to remember that a well fed community has always improved the opportunity for its people to thrive and flourish economically and therefore to enjoy the bounty of liberty America has to offer.

And for the millions of Americans who are still climbing out of a history where the sunshine of liberty has yet to fully light their future, they can now increasingly look to their gardening neighbors by way of a neighborhood food pantry to help provide healthy fresh food that years earlier would have been lost to waste, and by extension, to a better chance to advance in school and the workplace.

And that is not just a dream. It’s a reality.

While most other service projects call for you to be at a specific location at a certain time, you can complete the AmpleHarvest.org service project on your own time and at your own pace.

If you are in a small town, it might only be an hour or so but if you are in a larger community, it the greater opportunity might end of taking longer… it is entirely up to you. Learn more about how you can help end hunger and malnutrition in your community at ampleharvest.org/lnationaldayofservice-2/