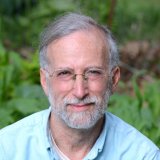 AmpleHarvest.org logo and founder in 2009

For most people, May 18 2009 was a lifetime ago.  The President was Obama, we were listening to Black Eye Peas, and we were still more than a year away from the launch of Instagram.

For me, it was yesterday.

It was also about two months from the day I woke up with an idea and registered the domain “AmpleHarvest.org”.   Then with the help of two volunteers, a web site was built based on a vision embodied in a PowerPoint Presentation that formed the outline of my idea.

Once the site was built and tested by several senior citizens (thank you mom and others) because I knew that most pantry managers were older volunteers, it fell in my shoulders to “do something” to get the ball rolling.  It started with pitching it to food pantries, to gardeners, to the media and to anyone else who could help.  It should be noted that there was no non-profit called AmpleHarvest.org yet, there was no staff, there was no business plan, there was no clear vision of if/how this would succeed and there was no clear vision of what success would look like, although I did tell people that once the first gardener donated food, I could declare the program was a success with all future donations building on that.

As I was working on the project, Feeding America provided me with important insights and guidance – a partnership that continues today and includes all of the Feeding America food banks nationwide.  I also received feedback from an amazing couple that were donating eggs to a local food pantry, a nearby gleaning program called America’s Grow A Row, and a local sustainability organization – help that was critical towards making AmpleHarvest.org a success from the start.

I started with a press release, a call to a long-time friend now working at Google (which ultimately led to our $480K/year advertising grant – Thank you Google!), a random meeting at U. of Connecticut while I was picking up my daughter that ultimately led to my meeting the President and First Lady Obama, my being named CNN Hero, Huff Post Game Changer 2011, and countless meetings and encounters with people of all walks of life who also wanted a better future.   Soon thereafter, two foundations (Good People Fund and Ittleson Foundation) stepped up with critically needed funding and guidance.  Since then, many others have offered both – thank you all.

I eventually met the key thought leaders in food waste, and we debated for some time, what term should be used for this effort (I hate “food waste” – sounds like pig slop, but it seems we’re stuck with it).

One important moment for me the day after being named a CNN Hero was that following the live TV interview with Ali Velshi, the producer asked how I felt about being a hero.  I glibly responded that in reality, it was the millions of gardeners who donated food (and would continue for years to come) that were the real heroes.  That response provided some clarity for me in the real work we were doing.

All other food waste and hunger programs are focused on the food itself.  We however were focused on a social change solution – awareness and opportunity to enable gardeners to do what they’ve always wanted to do – donate excess food so it would not be lost to waste.  The importance of that was our solution was permanent in that once a gardener knew that they could donate food and to where, they’d donate for the rest of their gardening life.  That made them the hero in their community.

Today, I spend much of my time foundation, corporate and personal fund raising to keep the wheels turning.  One exciting program we are announcing is “Virtual Roots” – inviting people nationwide to buy yearlong AmpleHarvest.org food pantry sponsorships and businesses to buy yearlong sponsorships of all of the AmpleHarvest.org food pantries in a state (NJ already taken – thank you National Vision Administrators)

Over the course of the decade, 8,500 food pantries – a quarter of all pantries in America – in 4,000 communities across all 50 states have joined AmpleHarvest.org

Several studies have shown that gardeners very much want to donate their food, will do so when given the opportunity, that they have enough excess food to feed 28 million people, and lastly, if all that food got to hungry families, the nation’s health care costs would go down $58 billion per year.

All because of an idea that morphed into a PowerPoint presentation, two volunteers, some amazing staff and board members, your donations, and 42 million home and community gardeners.

I’m pretty sure that I won’t be the person writing our 20th birthday announcement – that will fall in time to someone else who’ll pick up the reigns at some point, but I will be there rooting for each of the millions of heroes across America who will be ending hunger by ending the waste of food, reducing diet related diseases by helping food pantries get healthier food, and improving the environment both by contributing to a lower carbon foot print and reduced waste stream in thousands of communities across America.

Most 10th birthdays are accompanied by a cake and candles to extinguish.  Ours offers fresh vegetables with hunger/malnutrition to extinguish.

Happy birthday to us.  All of us.