Balcony Gardening with a 10 Umbrella Battalion 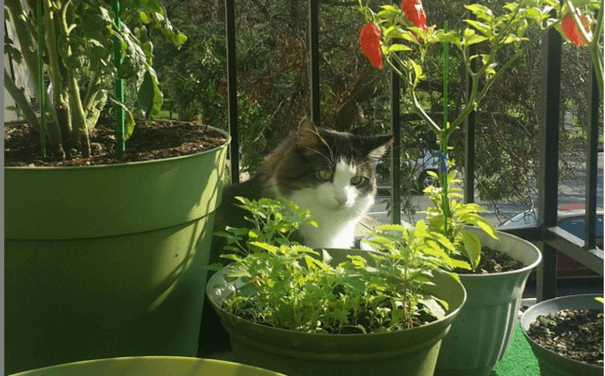 This is a guest post by one of our Instagram friends. I was so impressed by the pictures of her balcony garden that I asked her to share a little bit about what she’s growing and how. It’s a great story and an inspiration to anyone who thinks they don’t have enough space to garden. You don’t have to live in the country or the suburbs to have a great garden…and one that produces enough fruit and vegetables to share with those in need. This is Natalia’s story: 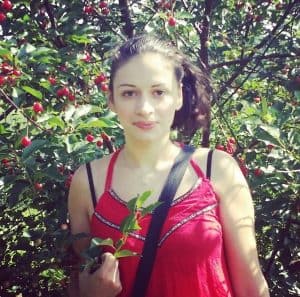 My name is Natalia, and I am originally from South Pasadena CA. Right now I live outside of Washington DC, and my life is filled with working, going to school and raising my son Alex. But my hobby is-you guessed it – balcony gardening!

Let me start by saying that several years ago, I had absolutely no experience with gardening at all, and it began completely by accident. My third floor balcony is only 45 square feet, and for the first two years that I lived here I rarely even went out on it, let alone think of growing something. One day while shopping, I stumbled upon some catnip seeds, and thought it would be an awesome treat for my cat Percy. I bought a pot, a bag of miracle grow soil, and planted them that night. Yet the more eagerly I awaited them to sprout, the more…nothing happened. Almost two weeks later, after I came to terms with the catnip fail and not wanting to waste a pot of soil, I halfheartedly stuck two very old mammoth sunflower seeds (randomly found at the bottom of an old tool box) into the pot of soil and forgot about them. To my astonishment, several days later, I was amazed to discover two tiny sprouts stretching towards the sun. And so it began. The sunflowers grew at least an inch a day. Soon, they were taller than my apartment roof, and I was harvesting two bowls full of seeds! (Oh, and the catnip finally did decide to emerge, so I called it “Frankenstein in a pot”).

Fast forward two years, and I can now proudly say that I have a pretty successful balcony garden. I currently have: cherry tomatoes, regular tomatoes,  Chinese lanterns,  eggplant, green onion, chamomile,  lavender, catnip, chives, 3 kinds of dill, cat grass, parsley, cilantro,  habaneros, chilies, jalapeños,  strawberries, ghost peppers, carrots, and  basil. I found a series of amazing pots at Wal-Mart: they have a little opening at the bottom so that you can see how much water the plant has, also allowing the plant to draw it in as needed, and not needing to put the pot up on “feet”. These pots come in various shapes and sizes, and are very sturdy, affordable, and come in pleasant colors. I tend to water either before sunrise or after sunset, but sometimes in the late afternoon. For soil I use miracle grow, and for the fertilizer “Jobe’s Organics Vegetable and Tomato” which I bought at Home Depot. It smells awful but is amazing! (I only use it once a month on all my plants). 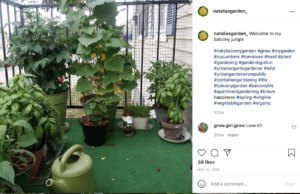 I find that I can pretty much grow anything I want since my balcony gets at least eight hours of sunlight each day, although I do use my umbrellas to shade plants requiring less sun, especially herbs. The great thing is that I don’t have to stop growing after summer is over! In late august I plant leeks and kale which don’t mind a little snow, and in the fall I plant garlic to harvest in the spring. Although it doesn’t need constant care it’s nice to know something is growing out there in the cold!

I found that gardening is a work in progress. My mistakes and victories are closely intertwined together, but that’s part of the fun! In the winter I carefully draw out grandiose plans only get a nature reality check once everything starts growing. While the plants are small I have to cover them up with umbrellas (my balcony is not covered) so that the rain will not harm them. Neighbors smile in amusement seeing me standing out there in the pouring rain, setting up my 10 umbrella battalion, whenever a random storm would strike. When I start seeding in early March, I must ban Percy and Felix, my two cats, from my bedroom so that they don’t destroy the seedlings. This does not sit well with them. Finally, in the summer, I have to fight beetles and aphids by drowning them in soapy water by hand, or spraying with an organic spray, praying it will not harm my plants.

Yet all of this is worth it, as I am sitting here with a cup of tea, eating cherry tomatoes from my bush as I’m writing this blog. Everything is so vibrant, so green, so beautiful! A few of my neighbors even shook my hand in the past few months complementing me – can you believe it? I’ve actually inspired several to start growing as well, because they see that it is possible. I’m not going to lie, however, and say that it’s a piece of cake, because having a balcony garden requires daily attention, research and hard work. To some degree I find that it is probably a bit trickier than growing in the ground, because you need to accurately predict how much soil your plants will need in order to use your space most efficiently. But it’s not impossible.

The best recipe for success is trial and error, because when you see something isn’t going right, you can always change what you’re doing to accommodate the plant (replant in a bigger pot, thin, support, etc.) But the payoff will be worth the trouble, I promise! The chilies, lavender, and catnip that I harvest and dry last me all winter (by the way the catnip is MAGICAL. Completely different from store bought.) I never have to buy tomatoes—and we eat a lot of them. As a matter of fact, I can barely keep up between the two bushes. And I always have fresh herbs to use in the kitchen. Some days I produce so much I even share with my neighbors! My biggest advice would be to just go for it, and not get discouraged if something doesn’t go as planned. I like to think if it this way: nature is on your side- plants want to grow. You’re just helping them along 🙂